It seems presumptuous to me to assume others are going to want to take the time to read about my travels and thoughts-truly, no obligation to read on.

Yes, it’s true I’ve had a an affair since I was a teenager.  And my wonderful, beautiful wife has chosen to share that affair with me at times. It all began when I touched the ocean waters I treasure, and felt an overwhelming, blissful and commited  connection to every continent, every country, every race and culture, and every person on earth.  I felt a strong drive to manifest this connection with as many of my brothers and sisters in other parts of the world as possible.

I’ve talked about recording some of my experiences in over 60 countries for many decades, however when I return daily life always has had a way of taking priority over writing.  Now I feel drawn to share them as I go, primarily to feel a little less alone, and more in touch with my feelings, while on this long trip to So. America (likely Chile, Argentina, Bolivia, Peru and Ecuador).  And because many of you have asked me to keep in touch, I know there won’t be time except in this manner.

This affair has been thrilling, problematic, physically dangerous at times, and always engaging.  I intend to include a few stories from past adventures, just to spice up the blog.  Especially for those more interested in suspense and drama vs. the more social and political aspects of my observations.

You should not feel any obligation to pay attention or spend time on my meanderings unless they are of special interest to you. Note that I am usually in isolated locations far from internet, so am unlikely to respond to email messages.  Feel free to send them, but don’t be surprised if you don’t get a timely response. 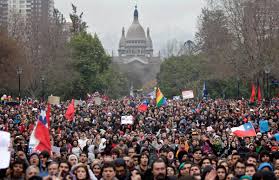 I arrived by bus/metro to downtown Santiago from the airport and noticed the familiar sight of people unloading signs and banners.  With crowds of mostly young people arriving in groups and individually, I quickly confirmed a demonstration was going to take place shortly.  After dropping my backpack at a hostel, I quickly returned to join what turned out to be approximately 100 to 150,000 people in a massive, very spirited demonstration and march for a couple miles down the main 6 lane drag of central Santiago.

The number of people, signs, banners and chants was absolutely staggering, and it seemed that major groups were joining all along the 2 mile route.  Though the majority were university, high and middle school students/faculty, I also met and saw many pensioners, working people/unionists, health workers, gay and lesbian groups (like Movement for Integration and Homosexual Rights), womens rights groups, environmental organizations, political prisoner/hunger striker support committee, every leftist grouping imaginable, the Atheist Society, etc., etc. There were students grouped by schools and areas of study–psychologists, law students, physical therapy, geologists, medical, veterinarians, and even naked art students with their bodies painted in astounding detail.  Banners as tall as 10 stories were unfurled.

The excitement, energy and militancy was palpable. Major overall themes were keeping public education alive/stopping privatization, damning government corruption, unmasking false reforms, tossing the Pinochet era constitution, instituting a new one written by the people of Chile, ceasing cuts of pensions, anti-capitalism, and redistribing wealth.  The political and class divisions in this society are palpable, long standing, and quite present in Chilean consciousness. I was warned by several people I met that I could expect violence at some point.  Seeing the many cops, mostly organized in tight groups of 10 and dressed in full riot regalia, I didn’t doubt it. When they say they are in a fight for the future of public education, they mean it.  If you want to see some graphic detail of the eventual battle, here are some pics (copy entire link):

As speeches went on at the end of the route, hundreds of people started running toward where I was standing.  In an effort to keep my promise to my family to try to not get arrested on this trip for a change, I chose to retreat as well.  As many buses full of uniformed police/soldiers and armored cars sped past me and began flooding the area, I continued my retreat. I am aware that this was a national demo including Valparaiso, Temuco, Pto. Montt, Pto. Arenas in the frozen southern tip, etc. Yet despite the detailed, advanced planning and organizing of the protests, to me it sure seemed like a grand introduction and welcoming party to a politicized Chile!