After several days of enjoying Pucon and the ashy mountain beauty, it became clear that the local mountain pass to Argentina may not open for a long time (¨possibly tomorrow it will open¨ I had been told for days).  The Chileans say that the Argentinians have not cleared enough ash from their side of the pass.  Then when the volcano down south erupted yet again, I finally decided to abandon my comfy hostal (with 2 kitchens and wood stoves) that I had mostly to myself, and the lakes region.

So my last 2 days in the area included a trip to Lake Caburgua north of Pucon, 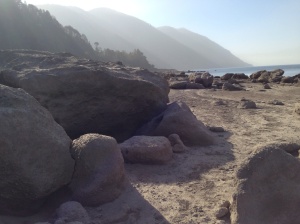 and a couple of the cascades nearby,

These shots from the Eyes of Caburgua cascade.

and a visit to the 80% Mapuche village of Cararrehue near the closed pass. I liked being in the indigenous center, but it seemed a struggling town both economically and culturally.  The pueblo is made up of small business, a few restaurants, artisan shops, some animal farming, agriculture, small modest houses, and very slowed down pace. 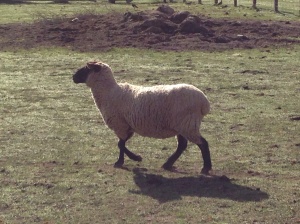 At 8AM the next morning, I headed north to Temuco for a couple hours, where I was told there were no seats on the last bus heading toward the more northern border crossing.  In my now well-practiced style, I looked at the ticket vendor sadly, shook my head, and declared that I had to be on that bus.¨Please, there must be something you can  do to help me out.¨After a long pause, I could see the more helpful side of the Chilean personality slowly emerge.

This transformation I find is facilitated by letting the person know you don´t have much money, and therefore they conclude you are not a rich tourist.  There will be no bribe coming, so they might as well exercise the better aspects of who they are.  Finally, he said ¨Well, let me have another look to see if there is anything I can do¨.  Miraculously, a ticket appeared, and I expressed great appreciation of his skill and ability to solve my problem.

My partly standing passage was to the border town of Longimay, as the bus that went all the way through arrived in Zapala, Argentina too late for my comfort.  I stayed with a family hospedaje there, and felt a part of the family.  The cousin of the owner, who heard me talking to someone else about a place to stay, took me there (she also stayed with the family while in town).

When  I tried to buy a ticket for the next morning to Argentina, I was told by the agent in the little station that sadly it was completely full.  A buddy of his came up and very helpfully said he´d give me a ride over the border for several times the bus rate.  After repeating the routine described above, the ticket agent finally made a call and came up with a seat for me.  Turned out, of course, that the bus wasn´t nearly full the next morning!

So I´m finally heading for an OPEN pass over the mighty Andes, passing incredible views, and beginning to envision and taste Argentina. 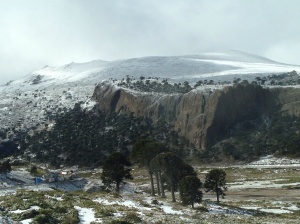 Family Next to Me on Bus

When we reach the border, there´s a long line of trucks, buses and cars.  I figure that customs is moving slowly, but after some inquiry find out that the snow the previous night had closed this pass as well!  We were sitting there for some hours hoping for the ice to melt and snow be cleared on both sides of the border.  I had little faith that the Argentinians would do better on this pass than the one down south!

Being stuck in the freezing weather gave me the opportunity to become friends with 4 Protestant evangelical pastors on their way in our bus to a conference in Noquen, Argentina.  A couple of them briefly tried to engage me into speaking about why I had not accepted Jesus, etc., but the real discussion was with Enrique (see below).  He happens to teach in a Jewish synagogue in Concepcion, Chile, and showed me the pictured star of David he wears always.  He proceeded to explain that his church worked very closely with Jewish synagogues, and loved and supported Jews and Israel.  We discussed religion, politics, and the complex relationship of evangelic christians and Jews.  I even ventured a question about my concern/vague belief that a central reason for evangelical  support was partly to witness (encourage?) the Armegeddon and second coming of Christ.

At any rate, one of the priests got turned away at the Chilean border because he was delinquent in child support payments, so the 4 musketeers, as I nicknamed them, became 3.  My exit document from Chile was routinely stamped, and eventually we very slowly moved toward Argentina over the frozen pass.

At the Argentine border, an official demanded that I pay $160 US as a ¨reciprocity payment¨.  I responded that I didn´t have that kind of money, didn´t understand why he was targeting those from the U.S., and couldn´t pay that money.  The tough official made it loudly clear I needed to travel all the way back to Tucuman, pay the absolutely required fee, and then return to exit the country with the proper form!  I’d heard something of this fee but enforcement varied, so didn’t think about it again.

The tense standoff accelerated with a line of people watching, my bus/luggage leaving soon, and guys in uniform inching closer to haul me off to my first arrest of this trip.  Finally, I accepted, after inquiry, that this payment was legit.  Then I launched in to my ¨please help me routine¨ implying that I would become their border post pet indefinitely unless we worked something out.  Like perhaps someone might have a computer here to process my payment on my credit card, and kindly print out the proper form before my bus takes off?!?

Well, Mr. Tough Guy and two other supervisors took me into their back office, and I was a bit unsure what was going to happen to me.  Mr. Tough transformed into the man to save the day, and went on the proper web site to try to process my payment.  With the help of his two female border agent co-supervisors, and myself interpreting the form requirements, we finally got the payment accepted correctly and printed.  With a great flair Mr. Tough Turned Sweet quickly stamped my passport, gave me a high five, and sent me running for the bus which was starting to inch away down the hill!  Finally, made it to Argentina!

2 thoughts on “The Great Escape From Chile”