After an all night bus ride north once across the border, I arrived at the large city of Mendoza, capital of this Province (state).  Rather than find a place to recuperate, I jumped a 4 hour ride up into the Cordillera toward Chile.  My goal was to have more time in the Andes, and see the tallest peak in the Western Hemisphere, Aconcagua.

I went to the very small pueblo (a restaurant, sandwich shop, small shop for food/drink, a medical clinic, souvenir stands selling local crafts, and a tourist office) named after an amazing natural bridge called Puente de las Incas.  The 2 recommended hostels were closed, and a 3rd was so grubby even I was hesitant about staying there.  There were no other options.  So I ventured in to the restaurant and asked if they knew anyone in town who had a bed to rent for the night.  One of the waitresses said she had a room.

I ate some food, and later she and her younger cousin (I think cousin, as the restaurant was a family run business) showed me several rather dirty rooms behind the restaurant that looked like it had not been used in a long time.  They proceeded to change sheets, sweep, clean and make the place good enough. Even my own private toilet.  Expecting freezing temps, they loaded the bed with wool blankets.  I joined the family for a big stake soccer game in the restaurant, which was very close until time was nearly gone, when the favorite team (Boca) scored 2 goals in less than 90 seconds to win it.  When the 30 something year old waitress handed me a set of keys to my living area, the entire family chided us, and began calling us “maridos” all evening…despite showing my ring and declaring that more than one wife was illegal in my country.

My Adopted Family Celebrating the Victory

Now, about this mountain…I got up well before dawn and began walking several kms–2 miles–to the entrance to Aconcagua National Park.  I had a good view of this majestic, highest peak in our hemisphere as the sun was rising.  I was totally mesmerized, and could feel my spirit fly to the top of the 6962 meter (22,841 foot) beauty.  Below you can see some of the pics of the area, and the brilliant sun turning the Aconcagua glaciers a bright gold.

These mammoth boulders are hundreds of feet down the valley at the river you see flowing at top left!!!

I know that one of the 3 famous 500-year-old Inca child sacrifice mummies in the Andes (the boy) was discovered on this mountain.  I also know that first person of our era to climb the peak was a Swiss who did it alone in 1897.  I´ve loved the Andes for a long time, since I first spied them 27 years ago in Peru.  They are 4300 miles long and stretch from Columbia to So. Chile-Argentina.

I was so moved by this beckoning, majestic mountain, that I began thinking of climbing it!  Then a firm commitment crystalized that I was going to make it to the top.   You might ask how such a decision could be made on the spur of the moment, without advanced planning.  Sometimes, in the midst of an adventure, we must dive in and just do it! My spirit that scaled to the top of the mountain told me this was the time to get my body up there.  And I’m in as good of shape as I have every been–perhaps not saying much, you smile?

In case you can’t understand the Aconcagua trance from my humble pics, take a couple minutes to check out these amazing shots of her majesty (cut and paste):

On the practical, nuts and bolts level, there are outfitters in the area who provide everything that is needed and help make the ascent.  So why not give it a try?!   Scouting the right climbing support business is a must.  Supplies must be triple checked.

You need to get to know your support team and fellow climbers.  Note the other old guy!

A helicopter takes all the carefully prepared supplies, highly organized equipment, and the team to the base camp.

The copter pilot had attempted the climb some years ago but didn’t make the last 500 feet and turned back.  One should always be prepared to let reality and common sense prevail in such exploits.  This climb is not the most technically difficult in the area.  His route is the one we’ll take (marked below): 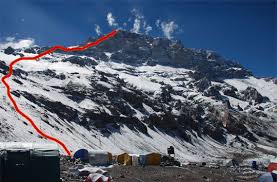 The graveyard near the mountain with the replica of the mighty Aconcagua and cross at the top has the remains of some of the climbers that did not make it (135 climbers have died so far, averaging 3 per year).  This certainly gave me some pause.

A brief moment of doubt struck.  But I am lacking in only a few areas, which intense desire and determination should surely overcome:

High altitude capability–none, as my head hurt and I was short of breath just hiking to the area.

Wealth–very expensive to attempt such a climb.

So I reluctantly concluded, after some deep meditation, in one of my brief moments of so-called clarity: I am forced to delay my physical assent until my reincarnation as a condor, or an eagle (as a fallback), at which time I will be fully prepared and intend to physically join my spirit which remains at the summit.

I reluctantly turned away from Aconcagua.  On the way back, I walked on the railroad tracks back to the village.  But alas no reliving my hobo days, as no freights have come on these tracks in 3 decades.

Train Bridge Crossing…I Decided NOT to try walking the tracks with the river roaring below!

Should you ever need to rob a train, I suggest this alternative to dynamite to assure it stops:

I also spied this Argentine Merry Pranksters bus that gave this old bus driver some joy:

And finally, la Puente (bridge) de las Incas.  This amazing natural bridge was made over the millenia from collapsed rock/earth, and an ancient hot springs giving off many minerals in the water and steam that crystalize.  The green algae completes this startling color palate.  The British built a large hotel and resort at this hot springs, but it was destroyed over 50 years ago in one of the major rock slides that occur here