Allan trying to match steps with each dance troupe–             a crowd pleaser at Gran Poder, largest fiesta of year

La Paz is the Manhattan of what I’ve seen in So. America.  You can count cars to 15 and never see a private automobile; pure taxis, buses and combis.   Chik cafes, shops and restaurants along the Prado assure you lose track of the fact you’re in S. America.  Traditionally dressed Aymara and Quechua mixed with smartly dressed business people, mingling with young folks desperate to be avante guard.  Poor barrios, beggars and homeless on the street…like any town in the U.S.

I’ve been watching people closely, and it is clear to me that the likelihood of traditional dress lasting another generation in the cities is slim.  It is too clear that acculturization of the youth into the euro/american stylistic ethos is rampant.  Young folks so want to be cool and hip.  So rather than my banter, how about a couple pics to tell the story?

I ran into Annie, covered in tats and piercings and wearing her autumn skimp, in the park playing with her dog.  I stuttered a greeting and introduction in Spanish, and she replied that she spoke English if I’d rather.  We had a long conversation about our lives…ok, Annie is NOT typical La Paz youth, as she was born in LA where she’s lived most her life.  Her U.S. born dad and Bolivian mom got hit in the crash/depression, lost their home, and moved here.   She is an artist, set developer, and lover of her fringe lifestyle.  Annie admits to covering up when walking with her mom, so as not to embarass her.

I was excited to meet Toki, a Japanese traveler, in the Folklore and Ethnographic Museum.  I was there most of the afternoon, and noticed her intent focus on the exhibits, especially pottery displays and videos. At one point, we were watching a video of Tiwanaku and she asked me in Spanish if I’d been there.  We spent much of the evening together discussing our travels (Spanish only), experiences, and lives pre-traveling.  She has been a physics teacher, math and English tutor, and now travels and does pottery.  She hopes to sustain herself by selling her pottery.  Toki travels alone for the same reasons I usually do…she disciplines herself to meet and get close to the local people where she’s at.  Toki has also perfected the art of open dependency, leading helpful people to be of assistance, want to communicate with her, and to engage in relationship.

Toki has many stories of those she has met along the way assisting and trusting her, and sharing the intimacies of their lives.  She emphasizes that you must communicate emotions from the heart, which is the key to compassionate human relationship.   Even though she may not understand the words in totality, others can intuit her presence, caring and openness.  We really loved being together, agreed that we were brother and sister, and I had the sense that we could have spent more time together were we not going our separate ways shortly.  In keeping with our styles, we said good-bye with no plans to meet again, yet confident that we would run into eachother along our paths of life.

It has been fun hanging out with Devin, son of my long-time friend Sandi Burnette.  He´s been a student, researcher and activist here and in Peru off and on for about a decade, including being a participant/observer in the development of the new Bolivian Constitution early in the Morales government.  It´s almost like being shown La Paz by a native of the City.  His current project, developing a film documenting the successful movement of Amazon indigenous tribes to block a major road through their lands for timber and oil extraction, is moving along well.  He has support from a very popular Bolivian folk singer, key Bolivian film maker, a major Bolivian muralist, and a grant to help fund the effort!   Heard on the news that the Government is reopening discussion on putting the road through after it being blocked for the past couple years, so Devins work here becomes even more important.

Here are some views of architecture and surrounds of La Paza: 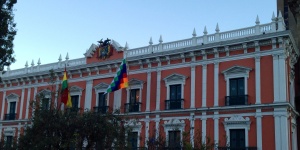 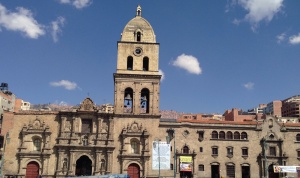 Church of San Francisco from Outside and Inside 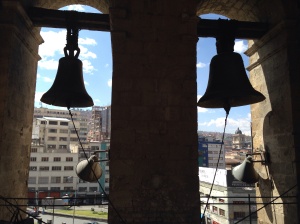 I love that Bolivians are so commited to their revolutionary politics: 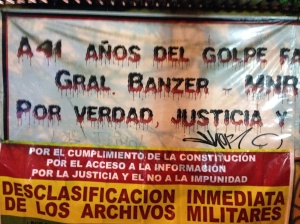 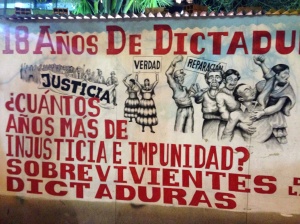 I went on the beautiful, new teleferico (gondola transit system).  Here are some shots from above: 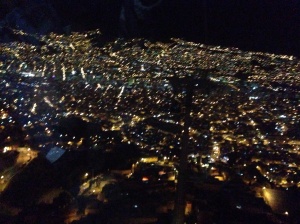 If you´d like to see more and better pics of this amazing city built in a crater, thei highest captal in the world, check out:

When I got to the teleferico top in El Alto, a separate city above La Paz housing mostly the poorer, more indigenous residents of the area, I was told there was not much to see or do.  So I wandered a couple blocks down a street and was about to turn-around and return, when I spied a museum.  Freddie at the entrance desk seemed surprised that I really wanted to see his museum, and acted like I was the first person in weeks to enter.  He offered to show me around, and quickly left his post at the door.  Though the museum said it closes for lunch and siesta at noon, Freddie stayed with me for 2 hours (1:30P) telling me about all the pieces in the great, 3 story museum.  I loved the sculpture, history, and militant paintings.

There was one painting that Freddy pointed out you can smell the roses at all times, and feel some air or energy pass to your hands when you put them near the painting.  The painting was of a beautiful woman that reminded me of my sister in law who recently died.  Her name was Aurora, and she possessed a sensitivity, knowledge, brilliance, and capabilities beyond which most normally have Access …somehow I wasn´t surprised when Freddy told me the painting was entitled Aurora!

Freddy and I really liked eachother, shut down the museum and I treated him to a long lunch.  Here are a sample of the pics: 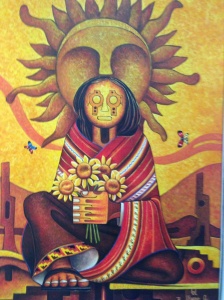 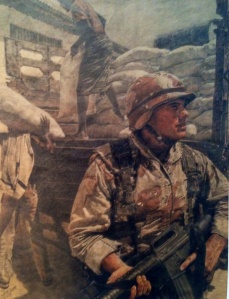 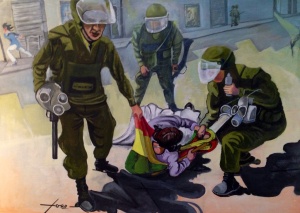 When proprietor asked about me taking photo, I told him I liked the idea of being able to make a phone call, eat my ice cream, die and be embalmed in same store!

I also visited the ruins of the major city of the Tiwanaku civilization, and got immersed as if reliving the era with them.  Though they are acknowledged generally to have been in power here for around 1000 years ending in around 1100AD, some say they were here as early as 15,000 BC!  Some believe that the amazing Tiwanaku architects designed Machu Pichu for the Incas.  Here are some pics of my wanderings through their physical remains of their immensely spiritual society:

I also enjoyed the museums on the site: 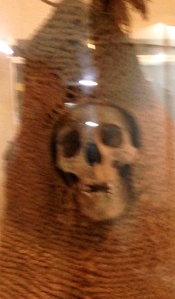 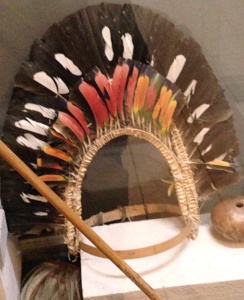 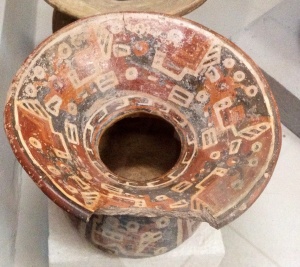 If you want to know more about the tiwanakus and/or see much better pics:

On the way to Tiwanaku, visited the mammoth La Paz cemetary in El Alto…really a city in itself with detailed maps, apartment like mausoleums, and endless streets.  I love cemetaries, as they tell lots of stories about people, and are quiet, safe places to sleep, generally (tho not camping this trip). 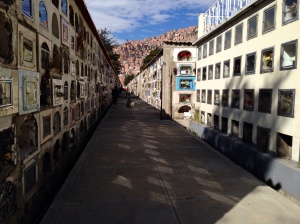 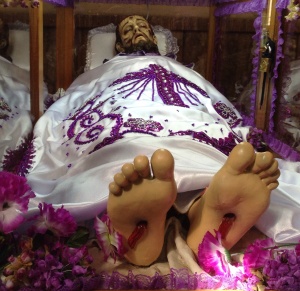 Jesús well preserved all these years in cemetary chapel

In La Paz I wandered through their historical and ethnographic museums: 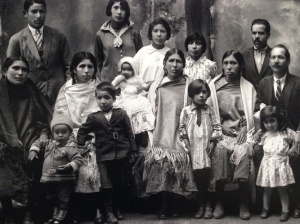 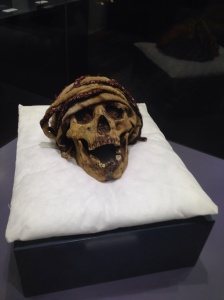 And finally, the Grand Poder, the largest and most splendiforous celebration of the year in La Paz.  It is an amazing meld of pre-Columbian spirituality and christianity morphed into an eye-popping, colorful event full of costumes, music, dancing, drinking and feasting until you drop.  La Paz swells to host millions from all over.  I couldn´t even begin to capture the beauty: 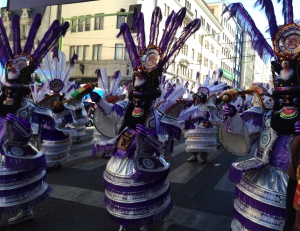 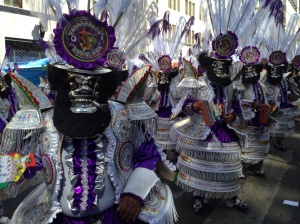 65 dance troupes and most with own band!

Getting pretty drunk by now along with a million or 2 others!

Take a minute and look at these pics and video to see more Poder:

I´m now off to the jungle for awhile in Madidi National Park…don´t expect to be around computers.

2 thoughts on “La Paz–City of Many Faces”