“One’s destination is never a place, but a new way of seeing things.”

Lake Titicaca is shared by Peru and Bolivia, and through the millennia various cultures have also developed, many at the same time, around the huge, beautiful lake and it´s 40 plus islands.  Titicaca is at an altitude of 12,500 feet and is the largest in S. America, if you don´t count the salt bay of Maracaibo.  I decided to relax in the La Paz weekend escape town of Copacabana for a couple of days before traveling through Peru.  Since I´d been in and around the lake before, I didn´t do the tourist route in and around Titicaca.

Titicaca on the way to Copa

Our bus and passengers caught different ferries to reach Copacabana

This shrine to Bolivia’s patron saint, Basilica of our Lady of Copacabana, built in the 16th century, is stunning. 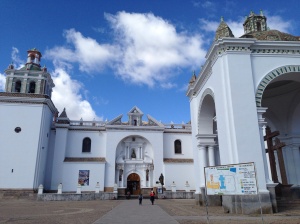 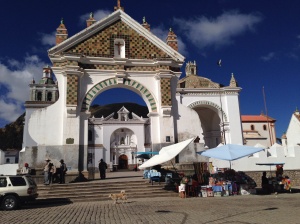 Check out more detailed shots of church if you have time: More pics of Basilica

Some other views of Copa: 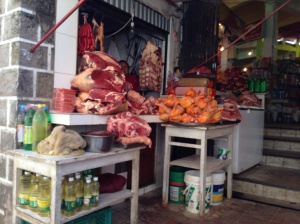 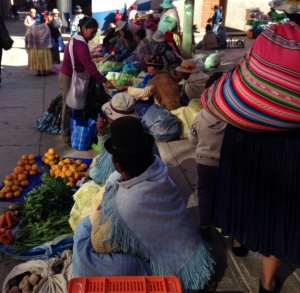 Chef Peter, is pictured below (doing his best not to look miserable) while recovering from a 3 day bout with Tupac Amaru’s revenge, including IV antibiotic/rehydration.  Peter gets my medal for most amazing traveler I’ve met so far.  He makes money as a taxi driver when not traveling, as well as being a Chef in Munich and on the road.  He’s lived in Australia, New Zealand, Africa, and elsewhere for years at a time.  In 35 years of travel, he’s covered over 130,000 km (83,700 mi) and 95 countries.  ALL BY BICYCLE!!!  His trips include Munich (home town) to So. Africa, and Hong Kong to Istanbul.  He met only two other travelers in his many months of traversing China years ago.  He’s done over 20,000 km on this trip and will end up biking the Andes from South to North…yikes!

I did walk to a small fishing village nearby called Saraina, and below are a few images of that outing:

Village Pres (with grandkid), VP and Secretary. We talked about the village and projects the village is working on. 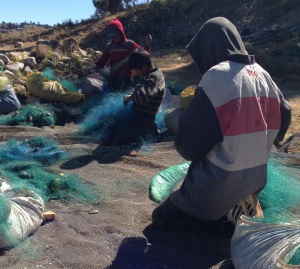 Boys straightening and packing nets for next day’s outing.

View from the village shoreline.

I also became friends with the microbus driver who invited me to see the house he’s building for and with his son in the north of the penninsula.  Some pics from the trip there:

View from cliff by the new house

His mom and dad, perhaps 72 years old, were preparing cement… building crew was all family.

From Copa, I took a long bus ride to the well-preserved colonial city Arequipa, Peru.  I enjoyed reading, relaxing and watching movies on the great long distance buses.  Took a walking tour of the great white city, where buildings are built of sillar, or ignimbrite, rock formed by millenia of volcanic activity and gases. Here’s a glimpse: 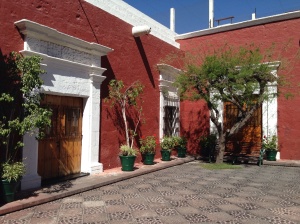 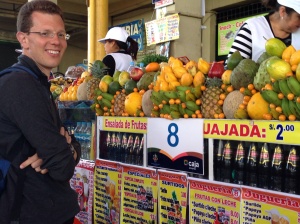 Roger (Swiss) and I hung out together in Arequipa and Colca Canyon trip.

I loved the old, beautiful St. Catherine convent, which resembles a small, walled city.  It is still in operation, though on a much smaller scale.  They discovered tunnels where the priests snuck in to bed the nuns.  There were also bones of fetuses found in some tunnels from nun abortions in this party convent of women from wealthier families (major donations needed to gain entry)…the guides do not want to discuss this.

Here are a couple of the buildings lit up at night on the main plaza: 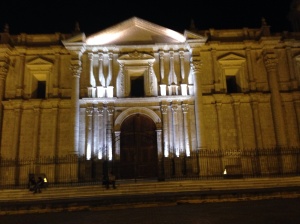 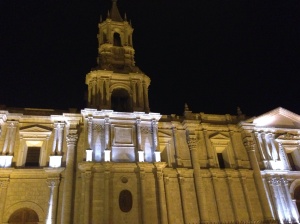 There is a major struggle going on in the huge farming valley nearby (Tomba?), where the government officials have been bought off by a Mexican mining magnate who plans to mine in the area upstream from the valley.  Farmers and their families are putting up a strong resistance to the mine, inevitable pollution of the river, and destruction of their way of life.  We had a long conversation with some of those affected, who have been staging a long vigil in the central plaza of Arequipa.  We exchanged chants as well as strategies of resistance.

Blasting corrupt governor-“You bathe in the blood of the people” 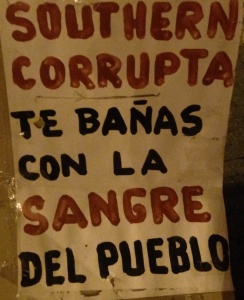 Banner with images below stressing need to use the valley for food for the people: 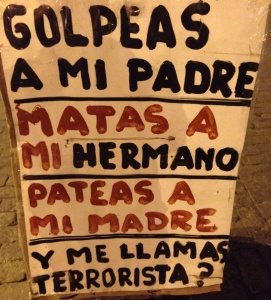 “You hit/shot my father, killed my brother, you kicked by mother…and you call me a terrorist?”

Mourning the loss of comrades–quotes from MLK, Gandhi and Oscar Romero

I went on a guided trek into Colca Canyon, one of the two deepest canyons in the world, which is paired with its deeper partner not far from Colca.  They are twice the depth of the Grand Canyon, though not as beautiful.  Still, the canyon was wonderful to see and traverse down to the river, with its waterfalls, oasis, and towering walls. The standout were the many condors to be seen–the condor is my animal being, I believe. 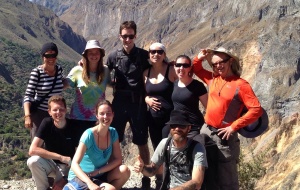 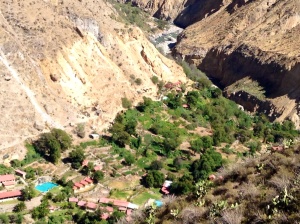 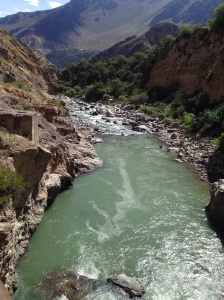 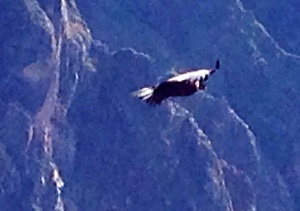 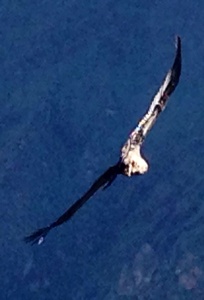 Don’t settle on these crappy photos, especially of the magnificent condors: Colca canyon and condors

On the way back, we passed by a couple small towns.  Volunteers were planting the central plaza with beautiful flowers and plants, others were selling, hanging out, or driving their very cute motorcycle taxi carts. 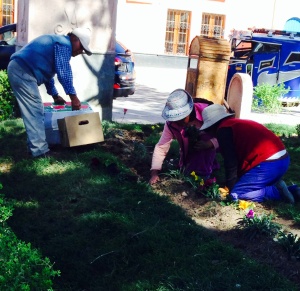 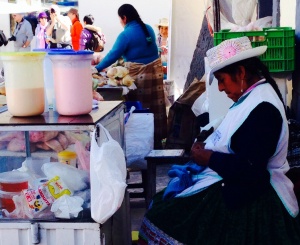 Hoping all is well with you!

“Traveling is a brutality. It forces you to trust strangers and to lose sight of all that familiar comfort of home and friends. You are constantly off balance. Nothing is yours except the essential things – air, sleep, dreams, the sea, the sky – all things tending towards the eternal or what we imagine of it.” – Cesare Pavese